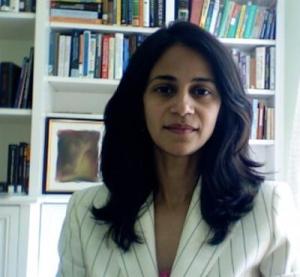 Surabi Menon, who has been researching Himalayan glacier shrinkage at the US DOE/Lawrence Berkeley National Laboratory.

Tibet’s average temperature last year was the highest in almost forty years, China’s official press agency said on Thursday. The capital city, Lhasa, reached 30.4°C in the summer, the highest since records began in 1961. Although the reliability of the source of this information could be questioned, it is supported this week by two research papers that clarify the status of the Himalayan glaciers.

Also on Thursday, Environmental Research Web drew attention to an impressively detailed review of what’s going on in this area, published in Environmental Letters at the end of January. The large area of glaciers in the Himalayan mountains, also known as the Tibetan plateau, sometimes sees it called the ‘Third Pole’. Shichang Kang of the Institute of Tibetan Plateau Research at the Chinese Academy of Sciences and his colleagues highlight that it is also sometimes called “‘the driving force’ and ‘the amplifier’ for global climate change”.

Kang’s paper points to measurements suggesting that the region has been warming faster than Europe and North America, and temperatures will likely rise by 4°C over the next 100 years. The paper also says that the Tibetan plateau contains 36.800 glaciers, with a total area of 49,873 km2 – placing it roughly between Ireland and Denmark in terms of size. 80% of these glaciers in Western China have retreated in recent years, losing nearly 5% of their area. If that is happening across all the glaciers, it would mean that the total shrinkage would be roughly equivalent to the size of Luxembourg. The extent of the permafrost – soil which never comes above 0°C – in the region decreased by 100,000 km2 from the 1970s to the 1990s. 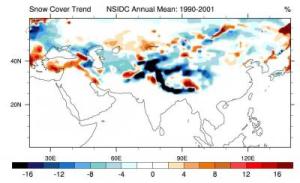 This map of the change in annual linear snow cover from 1990 to 2001 shows a thick band (blue) across the Himalayas with decreases of at least 16 percent while a few smaller patches (red) saw increases. The data was collected by the US National Snow and Ice Data Center.

Also this week, Surabi Menon of the US Lawrence Berkeley National Laboratory highlighted her work suggesting that smoke from fires in India is warming this region more than previously thought. “Black carbon from India is contributing to the melting of the glaciers,” she said on Wednesday.

Menon points out that black carbon emitted in India by burning wood, plants and fossil fuels increased by 46 percent from 1990 to 2000. Her paper, to be published in the journal Atmospheric Chemistry and Physics, said that this figure then grew by another 51 percent from 2000 to 2010.

Black carbon particles absorb sunlight, similar to greenhouse gases, although when black carbon is in the air it only warms only the atmosphere and not the surface, which greenhouse gases do. However, when it lands on the snow and ice, the surface absorbs more heat than when it is pure white, accelerating its melting.

Menon and her co-workers use computer models to calculate what is causing the glaciers are melting at the rate they are. “Our simulations showed greenhouse gases alone are not nearly enough to be responsible for the snow melt,” she said. Particles in the air, and black carbon in particular, made up the difference, and this could provide a practical way to combat the melting. “If you control black carbon now, you’re going to see an immediate effect,” Menon said.