The cool mountain habitats where many of the Sceloporus lizards are found have been subjected to very rapid climate warming, resulting in the local extinction of many species, including Sceloporus mucronatus (pictured here: a pregnant female). These are live-bearing lizards that evolved very low body temperatures for these cool environments and this low body temperature makes them extremely susceptible to extinction from climate warming. Credit: Barry Sinervo

Climate change is wiping out whole communities of lizards across the world and other animals are likely to follow suit, and may already be suffering. That’s according to Barry Sinervo of the University of California, Santa Cruz, who has studied lizard populations as part of an international scientific team. “Averaged across the planet, life has become intolerably hot for 5% of the world’s populations of lizards since 1975,” Sinervo told Simple Climate. “This has pushed these populations to extinction. The global level of lizard extinctions is very scary.”

Sinervo explains that all animals have developed temperature limits as a result of millions of years of evolution. Temperatures are currently changing too fast for animals to evolve and adapt to them. “All animals are susceptible,” he explained. “It is just easier for us to prove these thermal effects in lizards because a generation of ecologists have developed the methods we used.” Sinervo points out that frogs, toads and other amphibians are currently “at huge risk” of extinction, in part due to a fungus that is affecting them. “However, even the spread of the fungus is linked to climate warming by some authors,” the biologist notes.

As well as climate change, lizards suffer from destruction of the landscapes that they call home. However, Sinervo’s team only surveyed groups of lizards living in intact habitats in Mexico, meaning that the extinctions they saw were down to temperature alone. They used the information they gained to create a model to try and predict where more extinctions might happen, published in the top journal Science and reported on Simple Climate in May.

Species diversity has yet to be explored for many lizard groups of the world, as exemplified by this unnamed Liolaemus species from Bolivia. Many species could disappear before they are formally described. Credit: Ignacio De la Riva

“We tested on 4 other continents, and the model had pinpoint accuracy in locating observed extinctions from among hundreds of sites,” Sinervo explained. “We looked to see if other scientists had reported mysterious extinctions. They had – in exactly the locations we predicted.” All the data other researchers provided backed up the original predictions and the reasons behind them. “There really is no other cause besides a global one, that being global climate change,” Sinervo reasserted.

Preserving existing lizard habitats and creating new ones could help reduce the rate of extinctions that Sinervo predicts for the future, he suggests. However he admits that this is “only a stop gap”. “We must limit CO2 production – a lot,” he says. He estimates that 6% of the world’s lizard populations will become extinct by 2050. If the world is able to meet greenhouse gas emissions guidelines set by the International Panel for Climate Change, that will stay flat for the next 30 years. “If not, we will have 20% species extinctions by 2080,” Sinervo says.

The biologist concedes that evolution and natural selection may come up with a way for these lizards to avoid extinction that he has not considered, but thinks that it’s unlikely. “I hope the lizards evolve and adapt,” Sinervo says. “I hope we are wrong in the long term. I actually doubt we are wrong in the short. We will see many more climate extinctions in the next 20 years or so.” 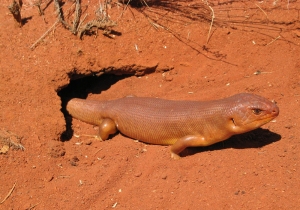 The Great Desert Skink (Liopholis kintorei, shown) and Slater's Skink (L. slateri) are both going locally extinct at sites around Uluru-Kata Tjuta National Park, and the physiological model of extinction suggests that some of these extinctions may be due to climate warming. Even though the Great Desert of Australia has only registered modest increases in temperature, it may be enough to send lizards to the tipping point, given that this is an extremely hot environment. Credit: Adam Stow

To give the lizards – and other animals – the best chance of survival, Sinervo calls for people to take steps to reduce their own carbon footprint. “Start simple – lower it by 15% every year for 4 years,” he suggests. “If you do, you will lower it by 52% overall.” Sinervo himself has saved 20% on heating bills by insulating his house, hence reducing consumption of fuel and in turn CO2 emissions. He advises buying local food, and growing your own in your garden, claiming that 85% of the energy consumed in getting food to your plate comes from moving food across the planet. “Shop at farmers markets,” he says. “These have the lowest transportation costs.” He also recommends that you should turn off your car rather than letting it idle, carpool and cycle. “I ride my son to and from school, 25km in and 25 km home,” he said. “I save tons of CO2 a year and feel healthier for it.”