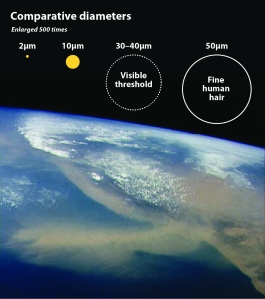 Dust particles in the atmosphere range from about one ten-thousandth of a millimetre to five hundredths of a millimetre in diameter. The size of dust particles determines how they affect climate and weather, influencing the amount of solar energy in the global atmosphere as well as the formation of clouds and precipitation in more dust-prone regions. The NASA satellite image in this illustration shows a 1992 dust storm over the Red Sea and Saudi Arabia. Credit: University Corporation for Atmospheric Research

Dust particles in the atmosphere contribute greatly to the uncertainties remaining in today’s climate models, but principles seen in breaking glass can further reduce those uncertainties. That’s according to Jasper Kok at the US National Center for Atmospheric Research, in Boulder, Colorado, who says that these principles can accurately predict atmospheric dust particles’ size.

Some dust particles reflect solar energy and cool the planet, while others trap energy as heat, depending on their size and other characteristics. How glass breaks is an important comparison because Kok studied mineral dust particles, which are usually emitted by wind-blown sand shattering dirt and sending fragments into the air. Kok suspected that this process, known as “sandblasting”, would cause fractures to develop in the same way that they do in other brittle materials. Regardless of their size, when such brittle materials fracture they all produce fragments with similar size ranges – and Kok found that this also held true in sandblasting. “As small as they are, conglomerates of dust particles in soils behave the same way on impact as a glass dropped on a kitchen floor,” Kok said. “Knowing this pattern can help us put together a clearer picture of what our future climate will look like.”

The smallest “clay” particles are below two-thousandths of a millimetre in diameter and remain in the atmosphere for about a week. In that time, they circle much of the globe and cool it by reflecting heat from the Sun back into space. Larger “silt” particles tend to have a heating effect on the atmosphere, but fall out after a few days. Kok notes that different global circulation models (GCMs) used to predict weather and climate change estimate that cooling clay is one-tenth to four-tenths of the total amount of dust emitted. Using both a theoretical analysis based on how brittle materials like glass shatter and measurements of actual dust particle sizes, Kok points out that the range is more like three-hundredths to five-hundredths.

This could mean that current models over-estimate the cooling effect of dust, Kok wrote in a Proceedings of the National Academy of Sciences of the United States of America paper published online on Tuesday ahead of print. However most GCMs are tuned to match measurements of the overall energy flow, or radiative forcing, caused by dust in the atmosphere. Clay particles play the most important role in these measurements, so the fact that Kok finds that they are a lower proportion of all dust is likely due to greater silt emissions.

He says that this means that there is much more movement, or flux, of dust emissions to and deposition from the atmosphere than previously thought. “It is more plausible that GCMs substantially underestimate the global dust emission rate,” Kok writes. “This result implies that the deposition flux of dust may be substantially larger than previously thought.” Silt particles are mainly found in the atmosphere within about 1,000 miles of desert regions.  Adjusting their quantity in computer models should therefore generate better projections of future climate in desert regions, such as the southwestern United States and northern Africa.