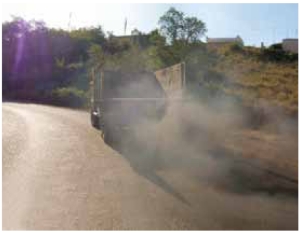 Vehicles are a significant source of black carbon and other pollutants in many countries. Credit: Caramel/flickr

Limiting methane and soot emissions would save lives and keep farming output high, as well as playing an important role in fighting global warming. That’s according to some 70 scientists who have reviewed the available research on these substances for the United Nations Environment Partnership (UNEP). Such cuts were also surprisingly feasible, with just 16 ways of limiting emissions providing about 90 percent of the possible climate benefit from a list of 2000 control measures.

“We estimate that adoption of the 16 control measures we considered would save about 2 million lives a year and save 50 million tons of crops a year,” said NASA’s Drew Shindell, who led the project. “For climate, putting control measures in place could eliminate about half the warming we’ll otherwise face over the next 40 years.”

These substances do not last as long in the atmosphere as CO2, which is an especially stable chemical, so the climate benefits of controlling them would be felt quickly. Yet, to date negotiations have largely focussed on CO2. In recognition of the need to control short-lived substances several diverse groups, including the Indigenous People’s Global Summit on Climate Change and the G8 group of world leaders, called on the United Nations to summarise the science in the hopes of starting action in this area. 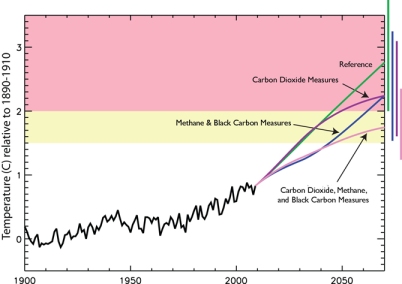 According to modeling conducted by the Goddard Institute for Space Studies and the European Commission’s Joint Research Center, controlling emissions of carbon dioxide (purple line) is the only way to limit global warming in the long-term. In the next two decades, however, limiting emissions of black carbon and methane (blue line) could have a significant impact. Limiting emissions of carbon dioxide, black carbon, and methane (pink line) would have an even stronger short- and long-term impact. The reference case (green line) is based on energy and fuel projections of the International Energy Agency (IEA) World Energy Outlook 2009 and incorporating all presently agreed policies affecting emissions. Credit: UNEP/Shindell

As well as gathering existing research findings on black carbon and methane emissions, the UNEP team also used them to develop predictions of likely impacts of control measures. They ran specific simulations using one climate-chemistry-aerosol model from NASA and one from Hamburg, Germany, based Max Planck Institute for Meteorology at the European Union’s Joint Research Centre. This work demonstrated how potent just a few measures, like controlling methane emissions from mines and oil wells, or encouraging a shift to cleaner-burning stoves, could be.

“I found it remarkable that for incomplete combustion, which gives you black carbon, a group of just nine measures was able to pull down the emissions by about 70 to 80 percent,” Shindell said. “And all of the technologies already exist. There’s no technological barrier whatsoever to reducing black carbon.” 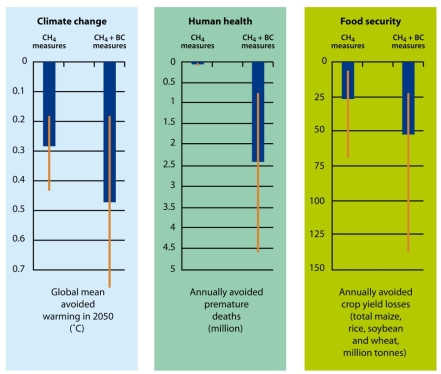 Global benefits from full implementation of the identified measures to limit methane (chemical formula CH4) and black carbon (BC) emissions in 2030 compared to the reference scenario. The climate change benefit is estimated for a given year (2050) and human health and crop benefits are for 2030 and beyond. The yellow bars show the range of predictions provided by the researchers' work. Credit: UNEP

The researchers emphasise that more work is needed to determine the cost-benefit balance for these measures. They also underline that such cuts do not eliminate the need to reduce CO2 emissions, which are the main driver of climate change in the long term.  But while the negotiations around CO2 cuts are complicated by nations’ need for energy and desire for growth, Shindell hopes the triple-whammy of benefits soot and methane limits offer will lead to more rapid action.

“In an ideal world people would look at the results and say, wow, doing these kinds of measures will produce major benefits,” he said. “Many nations are already pursuing many of these measures for air quality, but perhaps the recognition that there’s a climate impact as well will help prod nations, states, and cities to take air quality more seriously.” 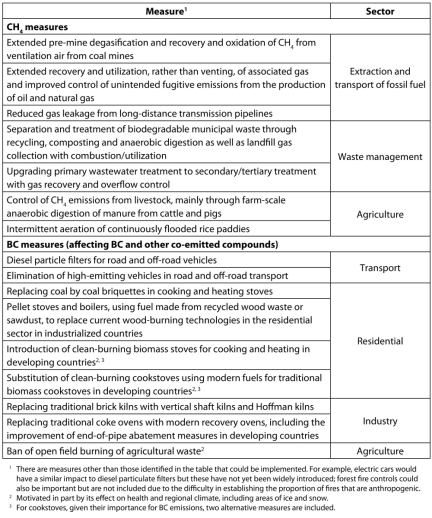