Sunrise over the Atlantic Ocean, 300 metres below which heat may have been stored during pause in warming during the 2000s, new models indicate. Credit:NCAR/Carlye Calvin

“The fact is that we can’t account for the lack of warming at the moment and it is a travesty that we can’t.” When that admission of climate science’s limitations was made public, it was seized upon as an important failing by the discipline’s critics. But actually the author of the “Climategate” email leaked from the University of East Anglia and printed worldwide in November 2009, was identifying a problem that needed to be fixed. Kevin Trenberth from the National Center for Atmospheric Research (NCAR) in Boulder, Colorado, was really complaining about the fact that scientists couldn’t track energy flows linked to short-term variations in climate well enough. That shortcoming meant that they were stumped by a particularly relevant question at the time: why temperatures hadn’t risen enough in response to the overall amount of energy flowing into the planet since 2003. Now, in a letter published in the research journal Nature Climate Change last week, he and his colleagues have come a step nearer to revealing the reason why.

Before 2003, Trenberth had found, satellite measurements of the balance of energy flowing in and out at the top of Earth’s atmosphere matched the amount of heat that could be measured in the land, atmosphere and sea. After that, though the satellites showed greenhouse gases are continuing to trap more heat from the sun’s energy, only about half that heat could be measured. Consequently, though the 2000s were Earth’s warmest decade in over a century of records the rapid temperature rises that brought this about ground to a standstill from 2002-2009. During that period average global temperatures decreased, although this trend fails the key scientific “statistical significance” test, and 2010 was again the warmest year on record.

This prompted Trenberth and his fellow researcher John Fasullo to ask in top journal Science “Where has this energy gone?” in April 2010. Yet, Trenberth and Fasullo did have an idea what the answer might be, their colleague Gerald Meehl underlined. “Following Kevin and John’s work on this topic using observations, it seemed like heat had to be going into the deep ocean when the surface temperature trend was flat for a decade or so,” he told Simple Climate. “But we don’t have adequate observations of deep ocean temperatures to quantify that. So we decided to look at a climate model to see if it could answer that question.”

To test their idea, the researchers therefore turned to the Community Climate System Model developed in co-operation by a number of US organizations. However, making sure the model is powerful and reliable enough to represent complex links between the atmosphere, land, oceans, and sea ice is hard work, Meehl said. “Assembling such a complex state-of-the-art tool involves contributions from many scientists at NCAR and across the US, and collaborating among all those scientists to model the climate system is a considerable challenge,” he added.

Five separate simulations of the 21st century based on predicted human greenhouse gas emissions showed global temperatures rising with occasional decade-long pauses like the one in the 2000s. Meehl, Trenberth, Fasullo and their colleagues picked out one particular example where the global average surface temperature rose by 1.4ºC between 2000 and 2100, with two decade-long pauses. Thanks to the detailed nature of their model, they could look at what was happening all across the world in these hiatuses. “During hiatus periods when the surface temperature trend is flat, the heat mostly goes into the deep ocean,” Meehl said. In fact, the massive volumes of water 300 metres below the surface warmed almost a fifth more during the pause periods than at other times, while shallower waters warmed almost two-thirds less.

Meehl said that though this was what the scientists had expected, they were pleased with the details the model revealed. “We know from the energy imbalance at the top of the atmosphere that is has to go somewhere. If surface temperatures don’t warm, and the upper ocean doesn’t warm significantly, the land and cryosphere heat storage is very small, so the deep ocean is where it ends up,” he said. “We expected the heat would go into the deep ocean, but what was interesting was the patterns of where and how it gets there, involving ocean processes and mechanisms whereby the deeper ocean would warm.” 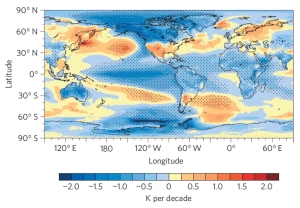 Average sea surface temperature changes from the beginning to the end of model decades where warming pauses in degrees Kelvin (see note in other diagram), which are similar to trends seen in the La Niña climate pattern. Credit: Nature

Those details included significantly cooler tropical surface waters in the Pacific during the warming pauses, while strips of water roughly parallel with Australia in the southern hemisphere and the Mediterranean Sea in the Northern hemisphere were warmer. This and other model elements during the cooling periods were similar to the La Niña climate pattern during which world temperatures seem to drop slightly. That pattern is tantalising enough for the scientists to suggest that La Niña and the pauses in surface warming are linked.

However, it will take more research to tell whether there is really a link between the type of deep ocean heating that the model shows during pauses in surface warming and La Niña, the NCAR scientists say in their paper. In fact, it’s still not confirmed that the deep ocean heating itself does happen, Meehl acknowledged, though these results are another hint that it is important to try and get that confirmation. “It is a model result that points to the importance of making more measurements of deep ocean temperatures to pin this down in the observed system,” he emphasised.