One of the more bizarre scenes at Rio+20 was reigning 2011 Miss Universe Leila Lopes and Executive Board Member of the World Agroforestry Centre (ICRAF) Dr. Dennis Garrity meeting to call for a goal to halt land degradation and to scale up successful community projects to combat desertification. Credit: UNCCD

Every morning the news is full of fighting – between individuals and groups, within and between countries. When people seem to disagree over nearly everything, it’s strange to expect our leaders to come together for the good of us all, and the whole planet. But that’s exactly what they tried to do last month in Brazil at the Rio+20 UN conference on sustainable development that I recently covered hopefully here on Simple Climate. Will this meeting be remembered as fondly in 20 years’ time as the original “Earth Summit” meeting in Rio de Janeiro 20 years ago that its name refers to? If most reactions to the new agreement reached by political leaders are anything to go by, then no. While rich and poor countries’ competing priorities are largely responsible for the apparently weak wording, some hope of removing key stumbling blocks did emerge from the 45,000-person meeting.

On 22 June, world leaders signed a 49-page document called The Future We Want. As well as renewing the original Earth Summit deal, it charts a road to bringing through sustainable development goals when the UN Millennium Development Goals expire in 2015. It encourages a greener world economy, reducing consumption and improving energy systems. It calls for an international system to conserve high seas biodiversity, action to stop land being degraded and becoming desert, and support for small island developing countries. But the deal’s language lacks power, typically using “should” rather than “must”. And overall there was little about protecting the environment, and much about supporting fair economic growth – a fact that has been strongly attacked by some.

If these goals weren’t already seen as weak in the developed world, that outlook was clinched by how they were formed. The document had been agreed by civil servants even before world leaders began arriving in Rio, meaning that they instead spent their time announcing national initiatives. But the funding for these seems tiny, when the amount needed to meet the goals is estimated to be thousands of billions of dollars. The Sustainable Energy For All initiative – one of UN secretary-general Ban Ki-moon’s highlights of the meeting – saw Brazil commit $4.3 billion to promote universal energy access for its citizens. The US promised $2 billion in grants and loans to support public-private energy partnerships, while businesses and investors committed more than $50 billion to the same scheme. Japan pledged $3 billion in international aid for the green economy – even though the final treaty is vague on what the green economy actually is. 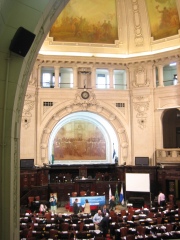 Side events, like this one calling for disaster resilience to be included in national legislation as a means of introducing more accountability into politics, played an especially important role at the Rio+20 summit, according to some observers. Credit: UNISDR

The chaos surrounding the meeting capped the seeming farce, thanks to events like Miss Universe’s appearance to help celebrate the signing of a treaty to hold back deserts at the original Earth Summit. But while there are plenty of grounds for criticism, little attention has been paid to why the treaty does so little to help the climate or other species. The lack of political power present during what negotiations there were meant they attracted even less press coverage than the summit itself.

As the focus on fair growth might suggest, developing countries see poverty as “the greatest challenge that we face in the world today”, according to Luiz Alberto Figueiredo Machado, Brazil’s chief negotiator. Meanwhile, developed countries are too concerned about their own economies to commit more money to supporting developing nations. The G77 group of developing countries, together with the US, therefore reportedly blocked a European proposal to declare environmental limits that shouldn’t be breached. Such limits, like how much CO2 is in the atmosphere, or how acidic the oceans are, might hamper the G77 group’s ability to grow their economies and reduce poverty in their countries. In particular developing nations fear that developed countries will use them for “green protectionism”, imposing trade restrictions disguised as environmental regulations. For that reason, countries like China want “common but differentiated responsibilities” – in other words stronger environmental rules for rich countries and weaker rules for poor ones. While that wording is included in the Rio+20 deal, the US has said that all should follow the same rules.

45,000 people at a conference does seem like a lot, but it’s concerns like green protectionism that the “side events” that many of them were attending have been helping to tackle. Some of the more optimistic delegates said that these events will have created hundreds of voluntary agreements on sustainable development. At them, businesses, non-governmental organisations and inter-governmental agencies boosted government pledges for sustainable development up to $513 billion, though it’s not clear how much of this money is new. However, this has been hailed as a new model where government and business leaders work together to make things happen without waiting for complete international agreement. It’s even been suggested that this is now the main point of such summits.

Business pledged to be a major contributor of funds to back the goals of the Rio+20 summit, a situation that made some uneasy. Credit: Corporate Europe Observatory

Developed world environmental charities and scientists came away from Rio angry at how little the main treaty did for the environment. New Scientist environmental writer Fred Pearce similarly damns it in comparison to the original Earth Summit, where he “felt part of history”. But the pundit John Vidal writes in The Guardian that he was angry and despondent after the Rio event 20 years ago, and by comparison getting all countries to renew that treaty today was a “fantastic achievement”.

In the period since Rio+20, I’ve read and heard a lot about how people should take more responsibility today for the future. Economist Niall Ferguson argues this about national debt in this year’s BBC Reith lectures. In his book, “Clock of the Long Now: Time and Responsibility”, Stewart Brand talks about viewing our civilisation on a 10,000 year scale. “The debt we cannot repay our ancestors we pay our descendants,” he writes. But he also quotes physicist Freeman Dyson, who underlines that on this time scale we have many conflicting responsibilities. “In order to survive, we have needed to be loyal to ourselves, to our families, to our tribes, to our cultures, to our species, to our planet,” he wrote in his book, From Eros to Gaia.

The outcome from Rio underlines such conflicts. Ultimately it’s in our personal interests to ensure the continued health of the planet and other species on it. But we also each have more personal concerns. It’s right for those who do not yet have access to things we take for granted in the developed world, like electricity, to do what they can to get them. If poor countries become richer while consumption falls worldwide, obviously rich countries must consume less. But individuals in rich countries will understandably get upset if told that they and their families can’t have exactly what they want. This is the battle, redrawn at the national level, that means that governments struggle to make progress on climate and environmental matters. And it’s this stalemate we have to resolve – for the sake of humanity’s future, and the futures of all of life on Earth.