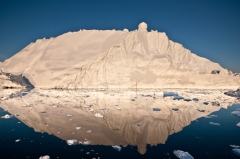 The midnight sun casts a golden glow on an iceberg and its reflection in Disko Bay, Greenland, where ice sheet mass loss was five times higher in 2011 than it was in 1992. Much of Greenland’s annual mass loss occurs through ‘calving’ of icebergs such as this. Credit: Ian Joughin.

47 scientists from 26 key laboratories across the world. 10 satellite missions flown over a period of 20 years, whose data adds up to 51 years’ worth. This giant effort looks to have squashed stubborn uncertainty surrounding one key climate question: How quickly are ice sheets resting on land masses at the North and South Poles shrinking? The international team has now found that Greenland’s mass loss is five times as fast as it was in 1992. Overall loss rates in Antarctica are roughly constant in this period, though the east of the continent is actually gaining ice. Over the past 20 years, the polar ice sheets have added 11 mm to sea level rise across the world, one-fifth of the total rise seen in that time.

“Our new estimates are the most reliable to date and they provide the clearest evidence yet of polar ice sheet losses,” said Andrew Shepherd from the University of Leeds, UK, co-leader of the project. “They also end 20 years of uncertainty concerning changes in the mass of the Antarctic and Greenland ice sheets and they’re intended to become the benchmark dataset for climate scientists to use from now on.”

Until the early 1990s, climate researchers expected that mass lost by ice sheets in Greenland as the planet warmed would be balanced by that gained by Antarctica. But measurements showed that both melting and ‘calving’ of icebergs could be speeding up at both poles. This meant the UN’s Intergovernmental Panel on Climate Change (IPCC) couldn’t put an upper limit on what ice sheets might add to sea levels in its last major report on global warming in 2007. And the overall picture has been confused, as efforts to measure whether ice sheets are shrinking or growing have given differing results. Since 1998, there have been 29 different estimates of changes in ice sheet mass. “Taken all of the past studies together, the recent global sea level contribution due to Antarctica and Greenland may have been anywhere between a 2 mm per year rise and a 0.4 mm per year fall,” Andrew told a press conference yesterday. At a workshop in 2010, the IPCC said it was concerned that no further progress would be made by its next report, due in 2014.

The GRACE mission detects changes in Earth’s gravity field by monitoring the changes in distance between the two satellites – GRACE A and B, or Tom and Jerry – as they orbit Earth. The drawing is not to scale; the trailing spacecraft would actually be about 220 kilometers or 140 miles behind the lead spacecraft. Credit: NASA

The confusion comes partly because previous efforts used less than five years’ worth of satellite data on average, which is short, compared to the length of time that it takes for ice sheets to change. It’s also partly because previous estimates have looked at the ice sheet areas and the periods over which their mass has changed slightly differently. And finally, the different satellite-based methods researchers have used have different strengths and weaknesses that affect comparison between them.

To resolve the disagreements between results these problems caused, space agencies in Europe and the US set up a joint project using as many measurements as possible. Called the Ice Sheet Mass Balance Inter-Comparison Exercise (IMBIE), the project used 19 years of data from satellite radar altimeters, and five years from laser altimeters. It also exploited another 19 years of radar interferometry data, ensuring that all different methods used the same areas and time periods. In these methods, scientists bounce radar waves and laser beams from satellite-mounted instruments off ice sheets, like giant police speed guns in space. They use the information that comes back to the satellites to track the ice sheets’ height, from which they can calculate their mass, and how they’ve moved.

Perhaps the most important improvements came in the eight years of gravimetry data collected by the GRACE satellites. This pair of identical twin satellites, nicknamed “Tom” and “Jerry”, chase each other round the Earth 15 times a day, about 140 miles apart. They measure small fluctuations in Earth’s gravitational field, which arise thanks to the link between mass and gravity famously discovered by Isaac Newton. Mass isn’t shared equally over the Earth, so gravity is stronger where there’s more – such as where ice sheets sit on its surface – and weaker where there’s less. When Jerry passes over a stronger gravity region it is pulled ahead of Tom, increasing the distance between them. When Jerry passes that region it slows down again, then Tom speeds up and slows down over the same point. To track Tom and Jerry’s separation, researchers use a combination of microwave communications, lasers, and accelerometers like the chips that allow a smartphone to know which way up it is. Together, these can detect distance changes as small as approximately one-tenth the width of a human hair. 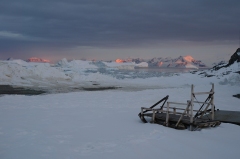 But scientists have struggled to turn that accuracy into ice sheet mass measurements. That’s due to “post-glacial rebound” where the surface layers of Earth bounce back as the weight of ice sheets reduces. The upward movement of material changes the mass in that region, which the GRACE satellites detect. That confuses the ice data, noted Erik Ivins from NASA’s Jet Propulsion Laboratory in Pasadena, California, IMBIE’s other co-leader. “We’ve been able to use global positioning system satellite stations in Antarctica to be able to measure those motions,” he explained. “Those measurements allow us to develop better models of that process. That reduces our uncertainty and this has allowed space gravity measurements to be consistent with the other techniques that we use.”

The final method that the IMBIE team compared tracks mass change directly through snowfall inputs and outputs like melting and iceberg discharge. To do this the researchers took weather conditions from climate models, and ice discharge from airborne radar measurements of new ice-thickness. This input-output method agreed closely with radar altimetry, but importantly was able to give much more detailed information.

When the scientists compared all the techniques together in a paper published in the top research journal Science today, they showed that ice mass varied in 2-4 year cycles. Averaging them all together showed the Antarctic ice sheet has been losing around 70 billion tonnes of ice per year from 1992-2011. They also found Greenland has been losing around 150 billion tonnes per year over that period, with the loss speeding up rapidly as it does so. That adds up to over 4 trillion tonnes lost from the polar ice sheets in this period. That’s the equivalent to a 0.59 mm sea level rise per year, with the uncertainty range narrowed to between 0.39 mm and 0.79 mm.

Accurately measuring an effect that hadn’t even been noticed 20 years ago shows how powerful satellite measurements can be, said IMBIE team member Ian Joughin from the University of Washington. But it also underlines how important it is that governments continue to pay for scientific satellites. “The results represent a huge return on the investment the world’s space agencies have made in remote sensing,” he said. “But several satellites are beginning to fail. And all three methods for determining ice sheet mass balance will be negatively affected as satellites fail and it takes time to build new ones or new ones don’t even come online. It’s really critical that these measurements are sustained.”