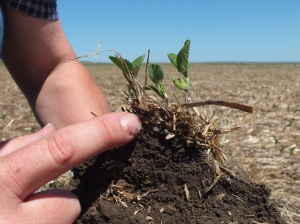 Another mid-winter feast has passed since I published the first part of this round-up of research linking food and global warming, its memory still pleasantly fresh in my mind. I’d hate to have to sacrifice any of it in the future. But what if I were forced to change or shrink my menu? You might not have to make these choices today, but scientists are helping farming adapt to a changing climate. They’re facing up to a big challenge: trying to reduce emissions, while maintaining food supplies.

As well as being affected by climate change, farming also produces some of the greenhouse gases that cause it – between one-tenth and one-third of the world’s emissions. Agricultural consultant Rob Carlton and his colleagues therefore looked at four different crop farming methods in March last year to see which would emit least greenhouse gas if the whole UK adopted it. The best approach was to dig up less left over plant material than conventional farming currently does, keeping more carbon trapped in the soil. This approach importantly produced the same amount of crops as conventional methods. That’s necessary, because converting pasture to arable land to make up crop shortfalls seen with other methods releases large amounts of greenhouse gas. “The need for emissions reductions should be viewed against demands on agriculture, which are increasing as the population and consumption increases and farmers diversify into industrial and fuel crops,” Rob said. END_OF_DOCUMENT_TOKEN_TO_BE_REPLACED