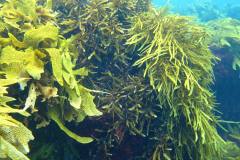 A mixed seaweed canopy in Western Australia, including Scytothalia dorycarpa (far right), which was completely killed along 100km of the Australian coast by a heatwave in 2011. Credit: Dan Smale

A record-breaking heat wave in 2011 killed a seaweed species that many fish and other creatures call home along a 100 km stretch of the Western Australian coast. That underlines the threat from climate change, which is driving more regular ‘extreme events’ like heatwaves, according to Dan Smale of the University of Western Australia (UWA). “Extreme events can wipe out species at their range edge incredibly quickly, which may have wide ranging implications for whole communities of associated plants and animals,” he said.

Metre-plus tall strands of Scytothalia dorycarpa seaweed sway around cool water rocky reefs in southern Australia, forming a playground for other species. It is thought to have evolved in cool conditions, and therefore to be sensitive to warmth. For that reason, in 2006, Dan and his UWA colleague Thomas Wernberg started tracking it in two main locations, Jurien Bay and Hamelin Bay, and 27 other sites. “We suggested that by monitoring its abundance and distribution, we could detect ecologically-significant climate change impacts over periods of years to decades,” Dan said. “We did not realise, however, that the highest-magnitude seawater warming event on record was just around the corner, and we did not expect to see such sudden and extensive shifts in its distribution.”

That extreme was reached in 2011 during the cooler ‘La Niña’ phase of the El Niño Southern Oscillation climate cycle. By contrast to the current Australian heatwave, temperatures rose thanks to an especially strong La Niña increasing the flow of warm water from the tropics. In March 2011 Thomas and Dan measured sea surface temperatures up to 4°C higher than the average for 2006-2010. The heatwave temperatures stayed more than 2°C above the 2006-2010 level for around 10 weeks in both bays. END_OF_DOCUMENT_TOKEN_TO_BE_REPLACED