A mixed seaweed canopy in Western Australia, including Scytothalia dorycarpa (far right), which was completely killed along 100km of the Australian coast by a heatwave in 2011. Credit: Dan Smale

A record-breaking heat wave in 2011 killed a seaweed species that many fish and other creatures call home along a 100 km stretch of the Western Australian coast. That underlines the threat from climate change, which is driving more regular ‘extreme events’ like heatwaves, according to Dan Smale of the University of Western Australia (UWA). “Extreme events can wipe out species at their range edge incredibly quickly, which may have wide ranging implications for whole communities of associated plants and animals,” he said.

Metre-plus tall strands of Scytothalia dorycarpa seaweed sway around cool water rocky reefs in southern Australia, forming a playground for other species. It is thought to have evolved in cool conditions, and therefore to be sensitive to warmth. For that reason, in 2006, Dan and his UWA colleague Thomas Wernberg started tracking it in two main locations, Jurien Bay and Hamelin Bay, and 27 other sites. “We suggested that by monitoring its abundance and distribution, we could detect ecologically-significant climate change impacts over periods of years to decades,” Dan said. “We did not realise, however, that the highest-magnitude seawater warming event on record was just around the corner, and we did not expect to see such sudden and extensive shifts in its distribution.”

That extreme was reached in 2011 during the cooler ‘La Niña’ phase of the El Niño Southern Oscillation climate cycle. By contrast to the current Australian heatwave, temperatures rose thanks to an especially strong La Niña increasing the flow of warm water from the tropics. In March 2011 Thomas and Dan measured sea surface temperatures up to 4°C higher than the average for 2006-2010. The heatwave temperatures stayed more than 2°C above the 2006-2010 level for around 10 weeks in both bays.

During that period, scientists collected reports of its consequences, including thousands of dead fish washing ashore. It meant a colony of Little Penguins living in the area failed to breed, while sharks and turtles ventured much farther south than usual to stay in comfortable temperatures. Coral reefs became bleached, which happens when colourful algae that live in the coral tissue die. In fact, it looks like the heatwave affected all levels of the area’s ecosystem, Thomas told me. “But few scientists have gone and quantitatively resurveyed sites and organisms after the heatwave. This put us in a unique position to make the sorts of discoveries we report.”

That unique position comes from what Thomas and Dan needed to do to understand just how badly the seaweed was hit. They had to gather together the equipment needed to send submarines or scuba dive  to the sea bed to measure it first hand, in rough, shark-infested waters. Once there, they carefully counted how much of the sea bed was covered by different species in six 0.5 x 0.5 metre square plots, known as ‘quadrats’. They also estimated how much S. dorycarpa there was along separate 25 metre-long transects, 40 of them in each bay, and more than five in the other locations. After taking measurements, the scientists could then compare them against what they got from the same methods in the same places in previous years. Finally, they cut seaweed tissue from the sites to measure how well they converted CO2 to oxygen through photosynthesis at different temperatures.

(a) A representative patch of mixed canopy comprising Ecklonia radiata kelp and S. dorycarpa (centre) at Jurien Bay prior to the heatwave and (b) the same site after the heatwave showing large gaps where S. dorycarpa was eradicated from the previously closed canopy. S. dorycarpa is now completely absent from Jurien Bay. Scale bars represent approximately 0.5 m. Credit: Royal Society

The scientists’ surveys showed that S. dorycarpa had completely disappeared from Jurien Bay, but no change was seen at the cooler, more southerly, Hamelin Bay. Overall, their data showed the heatwave caused the northernmost limit – the warmest place – where the seaweed could be found had moved 100 km south in less than 1 year.  That’s around one-twentieth of the total area it covers worldwide, they write in a paper published in the research journal Proceedings of the Royal Society B on Wednesday. Though the ranges many species can be found in have been moving towards cooler places near the poles, Dan says this is among the first evidence for such shifts in ocean ecosystems. “Our study showed unequivocally how climate can drive range contractions – there are very few studies that have shown this for marine species,” Dan said. Meanwhile, the seaweed tissue tests helped explain why the heat’s effect was so dramatic. “The species could not maintain photosynthesis at the temperatures that range-edge populations experienced during the heat wave,” Dan added “There is little doubt that the range contraction was driven by the warming event.”

Though S. dorycarpa has been hit hard, it’s too soon to judge what its absence will mean in the areas it has disappeared from. “With any kind of environmental change there will be ecological ‘winners’ and ‘losers’,” Dan said. “In the short term, the gaps in the seaweed canopy have been colonised by ‘weedy’ turf algae, which do not provide a complex, 3-dimensional habitat for other species. In the longer term, it is possible that warm-water seaweeds or even hard coral species will colonise the newly-available space. However, this could take many years and other factors like light, nutrients, ocean currents and maybe ocean acidification complicate any predictions. We need to continue to monitor these study locations to see whether communities return to a pre-heatwave state or – more likely – shift in structure towards more ‘warm-affinity’ communities.” 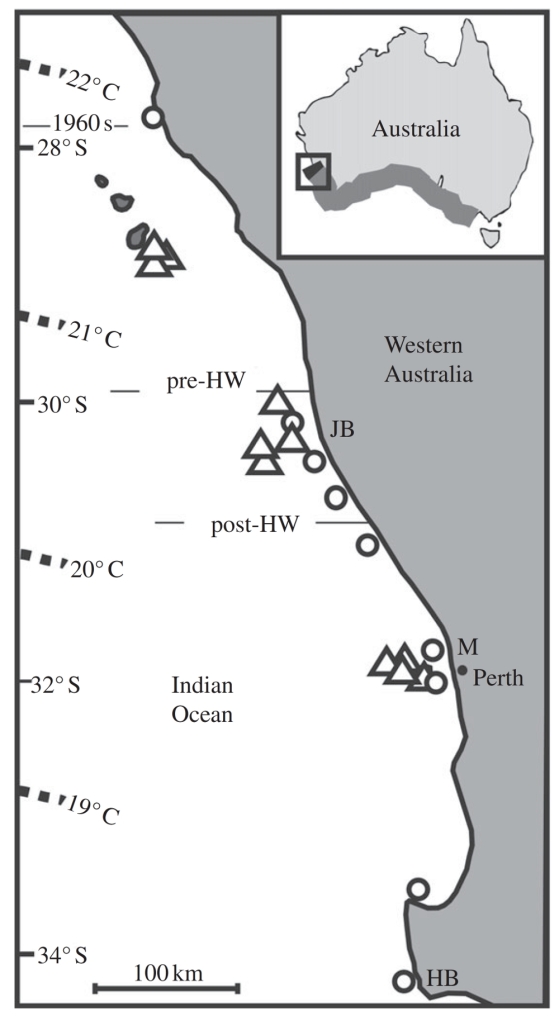 Locations surveyed by scuba divers (circles) and by small submarines (triangles) along the Western Australian coastline. Each location symbol represents at least three survey sites. The estimated equator-ward range edges for Scytothalia dorycarpa seaweed during the 1960s, during the 2000s before the heatwave (pre-HW), and from late 2011 onwards following the heatwave (post-HW) are shown. JB is Jurien Bay and HB is Hamelin Bay, while seaweed tissue was taken at Marmion (M), are also shown. Inset map shows approximate distribution of S. dorycarpa in southern Australia (grey shading) and the equator-ward range edge (black shading) of the region Dan and Thomas studied (black box). Credit: Royal Society