Tiny plants in Arctic Canada have shown that average summer temperatures there over the last 100 years are higher than those during any century for over 44,000 years. Gifford Miller from the University of Colorado, Boulder, and his teammates collected plants perfectly preserved but recently revealed by rapidly retreating ice sheets. The temperature findings are especially surprising as around 10% more energy from the sun fell on the Northern half of the planet 5,000 years ago than today.  And by looking at other scientists’ historical temperature records, they think the last time temperatures were as warm as today was likely around 120,000 years ago. “This adds to the growing consensus that the greenhouse gases we’ve added to the atmosphere have made a very large difference to the planet’s energy balance,” Gifford told me.

Scientists have known receding glaciers on Baffin Island are revealing well-preserved moss and lichen for almost 50 years. Gifford first read about it during his PhD, which he completed in 1975, in a paper written by a Canadian Department of Mines and Technical Surveys employee in 1966. “I had been to that site in 1981, found where he’d built a camp at the ice edge, measured how far the ice had disappeared and found plants coming out,” he recalled. “I’d repeated what he had done, but hadn’t done anything else with it. But as the ice is melting a lot right now we hypothesised that this wasn’t an isolated case.”

Glaciers don’t usually preserve what’s underneath them. “It’s almost counterintuitive to some people – you think of ice doing some damage to the landscape,” Gifford said. “But ice doesn’t move on its own, it’s driven by gravity. Where it’s flat, there’s not a whole lot of gravity pushing it, and if the ice is fairly thin and cold it’s an exquisite preservation agent. They’re frozen solid when they’re under the ice, which is very cold, like -14°C.” Sites like that can be hard to get to, as many are on plateaus high above Baffin Island. “You could mount climbing expeditions and spend a week getting to one site, so really there’s no practical way to get up there, except to have very good weather and a helicopter,” the scientist added.

A) The site where lichens Gifford and Kurt collected tested as at least 47,000 years old by carbon dating. B) The 47,000-plus-year-old lichens themselves. Photos by Kurt Refsnider from Aug. 2010. Image copyright Wiley, used with permission, see Geophysical Research Letters journal reference below.

Gifford convinced the US National Science Foundation to pay for such an expedition, in 2005. “It was a bit of a gamble, as we didn’t have any evidence other than one site,” he said. “But we got that support, expanded the search area and said ‘let’s just go look at one of those sites and see’. Sure enough, immediately we found plants there. Even where there’s very fast flowing, highly aggressive ice, in between there are flat spots. Basically these plants were coming out all over the place, almost everywhere we wanted to go we could find it. No-one anticipated the fidelity of preservation and commonness.”

After that first discovery, Gifford and teammate Kurt Refsnider returned to collect even more plants in 2009 and 2010. “The plants come out and look like the tundra all around, except that they’re brown instead of green,” Gifford explained. “The key strategy is to be within a metre of the ice margin. The ice is retreating now at least half a metre vertically each summer and 2-4 metres horizontally. You know that within a metre of the ice, the plants only came out in the summer we’re collecting, and yet they’re mature plants. It takes a few years to even get initial colonisation of new plants so anything you find within a metre of the ice is dead.”

Having found some moss or lichen, Gifford and Kurt simply had to snip off a bit and take it back to the lab to establish its age by carbon dating. “It told us something we’d never been able to capture precisely before – when the site got cold,” Gifford explained. “Because after the plants get covered by snow and ice they have to be continuously covered until we collect them.” As the plants are today being revealed, temperatures where they grew must now be at least as high as when they were first covered. And working the first coverage dates out from the age of 145 plants they collected gave Gifford’s team their next big shock – that some of them had been covered for at least 44,000 years. “We thought we’d get dates that were maybe 2000-3000 years old, and in 2010 we got dates that are near the limit of radiocarbon dating,” Gifford said. 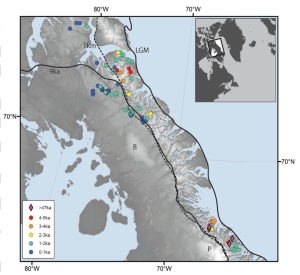 Baffin Island, in the Eastern Canadian Arctic. Circles (colour-coded by their carbon-dating age) identify the 135 sites where rooted plants were collected that were less than 5,000 years old, diamonds identify four sites where Gifford’s team dated plants being at least 47,000 years old. The margins of the Laurentide Ice Sheet at the Last Glacial Maximum (LGM), when it reached lowest, and 9,000 years ago (9ka – ka meaning “thousand years”), when it reached much higher, are solid lines, and the dotted line is a 1 km high contour. The sites containing plants older than 44,000 years have long been stranded above the Laurentide Ice Sheet and supported only local ice caps. P: Penny Ice Cap; B: Barnes Ice Cap. A tight cluster of 5 coastal sites (circled) have anomalous snowlines and are excluded from the team’s analyses. Image copyright Wiley, used with permission, see Geophysical Research Letters journal reference below.

That shows Earth’s temperature has veered way off the course of ice ages and warmer interglacial periods that subtle changes in its orbit and rotation normally drive it down. 5,000 years ago the slow wobble in Earth’s spin meant that the Northern Hemisphere was closer to the sun in our summer, and further away in our winter. “We got almost 10% more energy from the sun in the Northern hemisphere summer,” Gifford explained. “There was no ice on Iceland. If you tried to predict planetary temperatures, you would predict that the Northern Hemisphere has been steadily cooling for the past 5,000 years and ice has been expanding. We’re still 200 years away from the absolute minimum amount of energy coming in from the sun, so it should be still cooling. How can we be warmer than when we had 10% more energy coming from the Sun? It’s the increase in greenhouse gases.” Gifford’s team also looked beyond the 50,000 year limit on carbon dating to find the next obvious candidate for matching today’s warmth. Working from an existing historical temperature record built with data taken from a long tubular ice core they highlight the last interglacial, 120,000 years ago, as the best candidate.

The findings the team published on Monday in Geophysical Research Letters also suggest that global warming’s effects in the Arctic could be more severe than climate models predict. Because they had collected samples at different heights, they had a record of changes in the snowline, above which there’s year-round snow and ice cover. Gifford’s team found the snowline had risen around 650 metres between 5,000 years ago and the mid-20th century. And because the height of the snowline is in turn closely linked to temperature, they worked out that meant a fall in summer temperatures of 2.7°C. By contrast leading climate models simulate just 1.1°C of summer cooling from 6000 years ago to 1850. Gifford stressed that this could mean the models don’t properly simulate an important effect called Arctic amplification, which drives more extreme changes in that region than in the worldwide average. “It suggests that future predictions are underestimating the magnitude of warming that the Arctic is likely to experience in coming decades,” he said.

A) 135 carbon dates for recently ice-free rooted vegetation plotted against the difference between the height of their collection and the snowline at that site in the mid 20th Century. Dark circles are from the northern field area, lighter symbols are from the southern field area. The bars show uncertainties in height. The solid line shows the regression calculation through all data; the dashed line is the regression through the highest 20% of all data in each 1,000 year group. B) The number of samples Gifford and Kurt collected, broken down into 1000-year (big light blue boxes, 1ka bin scale) and 100-year (dark blue bars, 0.1ka bin scale) bin groups based on sample ages. Image copyright Wiley, used with permission, see Geophysical Research Letters journal reference below.