Planners must be alert to CO2 impact on water supplies 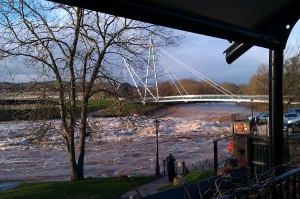 The River Exe submerges the end of a pub beer garden by the Miller’s Crossing bridge in Exeter. Nigel Arnell from the University of Reading and his team have predicted some increases in high river flow levels as climate change continues, but even larger decreases in low flow levels.

Although the river that slices through Exeter, UK, where I live, is today full from weeks of heavy rain there has been little reported harm from flooding. In the past, most notably in 1960, similar downpours swelled the river Exe until it engulfed the surrounding streets – and so we now have a flood defence system. But shifts in rainfall patterns are potentially the most serious climate changes that we’re facing as a result of the CO2 we emit. They pose a particular threat in a nation like China, where many ‘face severe water distress’, and where this month forestry officials warned about the country’s shrinking wetlands. Drought or deluge, what we do about climate change could have big effects on water supplies.

UK planners already include climate change in their water resource schemes, the University of Reading’s Nigel Arnell told me. But Nigel and his colleagues have also shown they’ll still need to be watchful if we stick to the non-binding Copenhagen Accord on climate change. “We can’t assume that if we adopt a stringent climate mitigation policy then we don’t have to worry about potential effects of climate change on water resource availability over the next few decades,” he told me. “This isn’t actually a surprise, because we know that impacts will continue even if we manage to hit a 2°C target.” 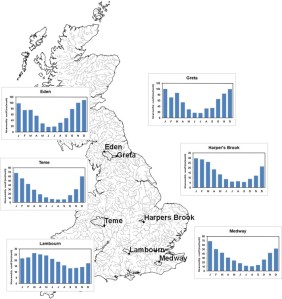 Having examined climate policy impacts globally, Nigel, his Reading colleague Matthew Charlton and Jason Lowe from the Met Office, near me in Exeter, wanted to zoom into the local scale. In a paper to be published in the March issue of the Journal of Hydrology, they looked at flows into six rivers around the UK. To study future long-term flow statistics, they turned to a collection of 21 climate models. With these, the researchers projected average climate for 30 year periods ending in 2030, 2050 and 2080, comparing them against actual measurements from 1961-1990.

For each period the scientists also looked at a range of standard scenarios taken from the AVOID programme, which advises the UK Government on avoiding dangerous climate change. Two, labelled A1B and A1FI in the graph below, are business-as-usual worlds. In them ongoing fossil fuel consumption leads to temperature rises of 4oC or more by the end of the 21st century. The other two limit emissions, with peaking in 2016 and 2030  giving a 50% chance of staying under 2°C and 2.8°C warming respectively. They could then feed rainfall, evaporation and temperatures from the climate simulations into river flow models Nigel had previously developed. To understand the pattern of changes, the researchers focused in on high and low flow thresholds. Rivers only exceeded the high threshold one day in 20 on average, likewise only falling below the low on just one day in 20 as well.

The four scenarios Nigel, Matthew and Jason modelled, with world greenhouse gas emissions (measured as the equivalent of billions of tonnes of carbon) on the left, and the temperature rise that would cause on the right. A1B and A1FI are ‘business-as-usual’ scenarios, while ‘2016 peak’ and ‘2030 peak’ will limit warming to 2°C and 2.8°C respectively. Image copyright Elsevier, used with permission.

Nigel’s team saw the clearest increases in the highest flows in the three northern and western rivers. However the climate models project a mixture of increases and decreases in the high flow threshold in the south and east UK sites. The ‘business-as-usual’ cases saw the greatest rises, nearing a one-fifth average increase by 2080 at most.

Looking at the water falls

Falls in water flowing at the low threshold were larger and clearer, with the driest days in all rivers getting drier through the 21st century in almost every model. These changes were much larger than the ‘natural variability’ occurring without human CO2 emissions, and were similar in every scenario up to 2030. By 2050 policies sticking to the 2°C temperature rise have cut a quarter off the fall in the low flow threshold compared to the scenario reaching 2°C by 2100. And by 2080, the A1FI hottest ‘business-as-usual’ scenario saw a maximum three-fifths average fall in low river flows, compared to just a quarter when temperature rises were kept to 2°C. However, that means planners will have to prepare for these river changes even if we do keep the world cooler.

The aim of this study is not to make precise local predictions, Nigel explained. Instead, he, Matthew and Jason used climate models to make “broadly physically reasonable projections of change in climate regimes over large geographic areas”. By the 2040 limit for most planners’ current schemes there is too much uncertainty arising from these projections to be much use to them. But the business-as-usual projections for later in the century make yet another case for why mitigation plans to limit emissions are beneficial. “Early mitigation slows the rate at which impacts reach certain thresholds and therefore reduces the adaptation challenge later in the century,” Nigel stressed.