The world’s surface air temperature change (“anomaly”), relative to the world’s mean temperature of 58° F or 14.5° C, averaged over land and oceans from 1975 to 2008. Inset are two periods of no warming or cooling within this overall warming trend. Copyright 2009 American Geophysical Union. Reproduced/modified by permission of Wiley/American Geophysical Union, see citation below.

Starting climate models from measured data helps simulate the early-2000s global warming hiatus better, and reduces projections for warming through to 2035. Jerry Meehl and Haiyan Teng have compared such ‘initialised’ model runs against more common ‘uninitialised’ ones starting without real-life conditions. The scientists, from the US National Centre for Atmospheric Research (NCAR) in Boulder, Colorado, find initialised runs get closer to modelling that hiatus and surprisingly rapid warming in the 1970s. Using the same approach, admittedly rough 30-year predictions for Earth’s surface air temperature initialised in 2006 are about one-sixth less than uninitialised projections. “We have evidence that if we would have had this methodology in the 1990s, we could have predicted the early-2000s hiatus,” Jerry told me.

The hiatus Jerry and Haiyan studied – an easing off in the rate of global warming since 1998 – is perhaps the aspect of climate change most hotly debated today. But hiatus is a slippery word, whose meaning depends on who is highlighting what points on which graph. Climate skeptics will often infer that it’s evidence that global warming is not a problem, or that it shows we know too little to act on climate change. The UN Intergovernmental Panel on Climate Change puts it in plain numbers: the rate of warming from 1998-2012 was 0.05°C per decade; from 1951 to 2012, it was 0.12°C per decade. “In addition to robust multi-decadal warming, global mean surface temperature exhibits substantial decadal and interannual variability,” it adds.  “Due to natural variability, trends based on short records are very sensitive to the beginning and end dates and do not in general reflect long-term climate trends.”

In a paper published online in the journal Geophysical Research Letters last week, Jerry and Haiyan touch on the current best explanations of the let-up. These include the chilling effect of recent volcano eruptions, but mostly focus on cooling in the Pacific as part of a natural cycle. Called the Interdecadal Pacific Oscillation (IPO), this regular wobble in sea surface temperatures has likely partly masked greenhouse-gas driven warming. The IPO has also been linked to a larger warming than might have been expected from greenhouse gases alone in the 1970s, the NCAR researchers add.

The network of thousands of ARGO floats, like the one being hoisted into the sea here, that span the world, have helped provide the data needed for decadal climate prediction. Image credit: Fruchtzwerg’s World, used via Flickr Creative Commons license.

Conventional climate models deliberately don’t start from actual observations of climate so that they smooth these kinds of short-term effects, Jerry pointed out. “Uninitialised projections are designed to simulate the response to external forcings like increasing greenhouse gases,” he said. “They are intended to run multiple ensemble members [many different possible conditions] to average out internally generated climate variability. Initialised predictions are designed to simulate both the response to external forcings and the internally generated variability.”

Though collecting the data for initialised climate predictions clearly requires extra work, in some ways it just extends science we’ve long seen on TV. “They’ve been doing it for numerical weather prediction for over 50 years,” Jerry noted. He’s trying to model decades into the future and, whereas weather forecasting just uses atmospheric data, this ideally needs data from land, oceans and sea ice as well. “It’s much more challenging for decadal climate prediction, mainly due to the limitations of subsurface ocean data,” the scientists admitted. “We only have decent upper ocean data from the ARGO ocean float observing period of the 2000s, though there is other scattered ocean data from previous decades that we use for hindcasts to assess model skill.”

In 2012, Jerry and Haiyan had showed that initialisation got closer to simulating rapid warming in the 1970s and the 2000s hiatus using just one model. In their latest paper they wanted to check that result using larger sets of models, devised by groups around the world and pulled together by the CMIP5 project. First they analysed two 10-year ‘hindcast’ simulations starting in 1976 and 2005 using 16 models, with and without initialisation. For the initialised set the average temperature change across all the models was nearer to actual temperatures than the uninitialised set.

“Predictions initialised now during the hiatus are starting at a somewhat cooler initial state than the uninitialised projections,” Jerry told me. “The latter are only capturing the response to increasing greenhouse gases, the former are resolving the internally generated variability that has produced the hiatus. For those reasons and others the initialised predictions produce somewhat less global warming than uninitialised.”

The outlook will clear up 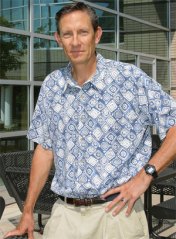 Cutting down to 14 models the scientists then analysed one 30-year hindcast starting in 1981 and one 30-year prediction starting in 2006, again with and without initialisation. Although the initialised models generally simulated lower temperatures than the uninitialised ones, they realised it wasn’t down to the initialisation itself in these longer runs. They tweaked the models to remove systematic errors in initialised runs, and when they did the same to uninitialised runs, they couldn’t tell the difference between the two.

“The model will drift away from the observed initial state just due to its inherent limitations in simulating the climate,” Jerry explained. “This model drift can be corrected by so-called bias adjustments – similar techniques were used in the early days of numerical weather prediction with atmospheric models. As models continue to improve, model error will be reduced and the need for bias adjustment will also be reduced.”

The NCAR team are now writing a paper that will show that decadal climate prediction techniques could have forecasted the hiatus. Jerry also underlined the approach’s broader importance in climate problems. “Decadal climate prediction has only been around since about 2007, so it’s a brand new field for climate science,” he enthused. “This is exciting because the area of science is tackling two very challenging problems. The science problem is: How can we predict near-term climate which is a combination of internally-generated climate variability and the response to increasing greenhouse gases? And the compelling stakeholder problem is where stakeholders are very keen for climate information on the timeframe of a decade or two in the future, not the end of the century.”

Worldwide average surface air temperature (°C) difference from the average for 1986–2005 (black), with (a) 10 year hindcasts starting from 1976 and 2005 and (b) 30 year hindcasts/predictions starting from 1981 and 2006. The red lines and shading represent averages over different initialised models and uncertainty ranges of the decadal hindcasts/predictions. The green lines represent multi-model averages from uninitialized runs, and the blue lines are ‘bias-adjusted’ uninitialised temperatures. Image copyright Wiley, used with permission, see reference below.

One Response to “Real-world grounding could cool 21st century outlook”